Best Paintball Gun for Self Defence

Choosing the best paintball gun for self defence

Why choose a paintball gun for self defence.

There are many makes, types and styles of paintball guns available to use as a defence weapon, with costs ranging from under £50 right up to over £1000 for competition and tournament enthusiasts.

But for a prepper the main reason for having a paintball gun is purely self defence and to ward off, would be, looters and intruders.

Remember folks, these are not toys, and can do more than enough harm to make someone think twice about trying to get past you.

At close range [10 – 20 mtrs] getting a direct hit anywhere on your body will cause injury and will hurt, big time.

A paintball gun is NOT A TOY.

Don’t be fooled into thinking that these are toys. They can do some serious injury – if fired at the face they will take an eye out with ease and teeth shattered like popcorn – and you don’t even want to think about the damage they can inflict if they are fired at the groin area..!

So we are talking a serious self defense, non lethal, weapon that is both very effective and LEGAL to own in the UK.

Yes a paintball gun is considered a legal weapon in the UK and you are perfectly within your rights to own one.

But remember the law – you face serious consequences if used as an actual weapon.

We are talking SELF DEFENCE ONLY here.

What are the important factors when choosing a paintball gun for self defence.

What is the best paintball gun for survival defence in the UK. 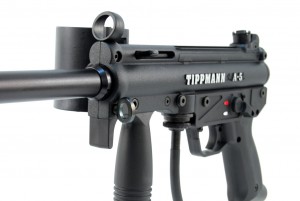 There are, of course, many to choose from and like everything, it boils down to getting the best value for your money.

I have, and also highly recommend, a Tippmann A5 as my preferred defence weapon – Amazon sell these at a very good prices – this is a link to the Tippmann A5

paintball gun on Amazon if you want to see reviews and prices – The Tippmann A5 meets all the requirements of a survival preppers needs.

It is reasonably priced at around £170 for the basic gun with paintball hopper.

There are loads of add-ons if you wish, but the basic model shown here is more than good enough for a preppers survival weapon.

In addition to the basic gun you will also need a propellent bottle. I find the 20oz CO2 bottle to be about the right size and weight for the gun. Amazon sell these as well and here’s their direct link for the  20oz CO2 bottle

. It easily screws onto the back of the gun. This will set you back around £20. I would suggest having two and make sure they are always fully charged.

One thing to be aware of is the paintballs themselves – don’t buy cheap – always buy boxed and sealed and keep them at a constant temperature, that way they will be perfect for use every time. I keep a box of 2000 unopened and sealed and also another box which is opened but the balls are divided into packs of 200 and resealed.

Having owned this paintball gun and used it many times, I know exactly what it can do and have seen it out perform many of the much more expensive competitors  – for complete reliability and durability you won’t go far wrong – as a defence and survival weapon it is certainly up the top as the perfect deterrent for would be looters.

I think it is perfect for any UK Prepper looking for a cost effective means of giving good protection where necessary.