Can You Eat Insects In The UK

Can You Eat Insects In The UK - Ants, Slugs and Snails

Is It Possible To Survive By Eating Insects From The UK?

​Wherever you live there will be insects and most of them are definitely edible insects.

When we talk about edible insects in the UK, we have to make a bit of a distinction between this small island and other countries where we see other larger, and quite delicious, insects that are more plentiful than here.

We do have a good selection of edible insects here but certainly not in the same variation and in the same huge amounts as you would find in various other bio-regions.

But from a preppers point of view, they represent a food source that is well worth considering. Their nutritional value is high, their packaged weight is very low, as is their physical size. So all in all, they need to be on any preppers radar as a potential food source when the SHTF.

Firstly, I do not recommend eating these insect in their raw, uncooked state - regardless of what you see on TV. From a survival point of view the risk of ingesting a toxin that is poisonous to your body is just too high.

Remember - jumping of a cliff will kill you, so will the tiniest little poisonous microbe - don't do it.! 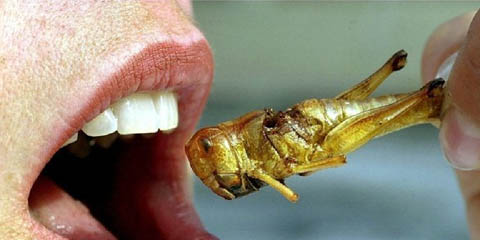 ‘Entomophagy’ is the term used for insect eating.
And eating insects is practiced all over the world.

The United Nations Food Standards Authority currently estimates that some 2.5 billion humans are consuming over 1000 different insect species in their everyday diet.

The list below is the generally accepted insects we can find and eat here in the UK. 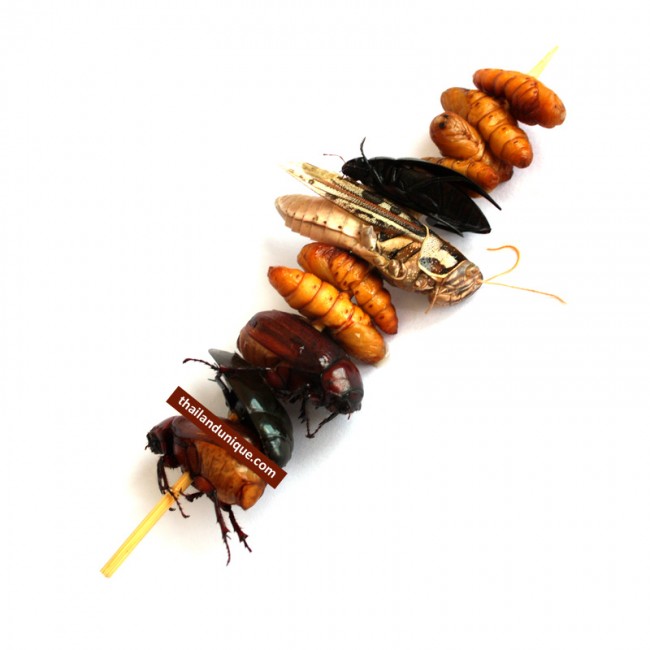 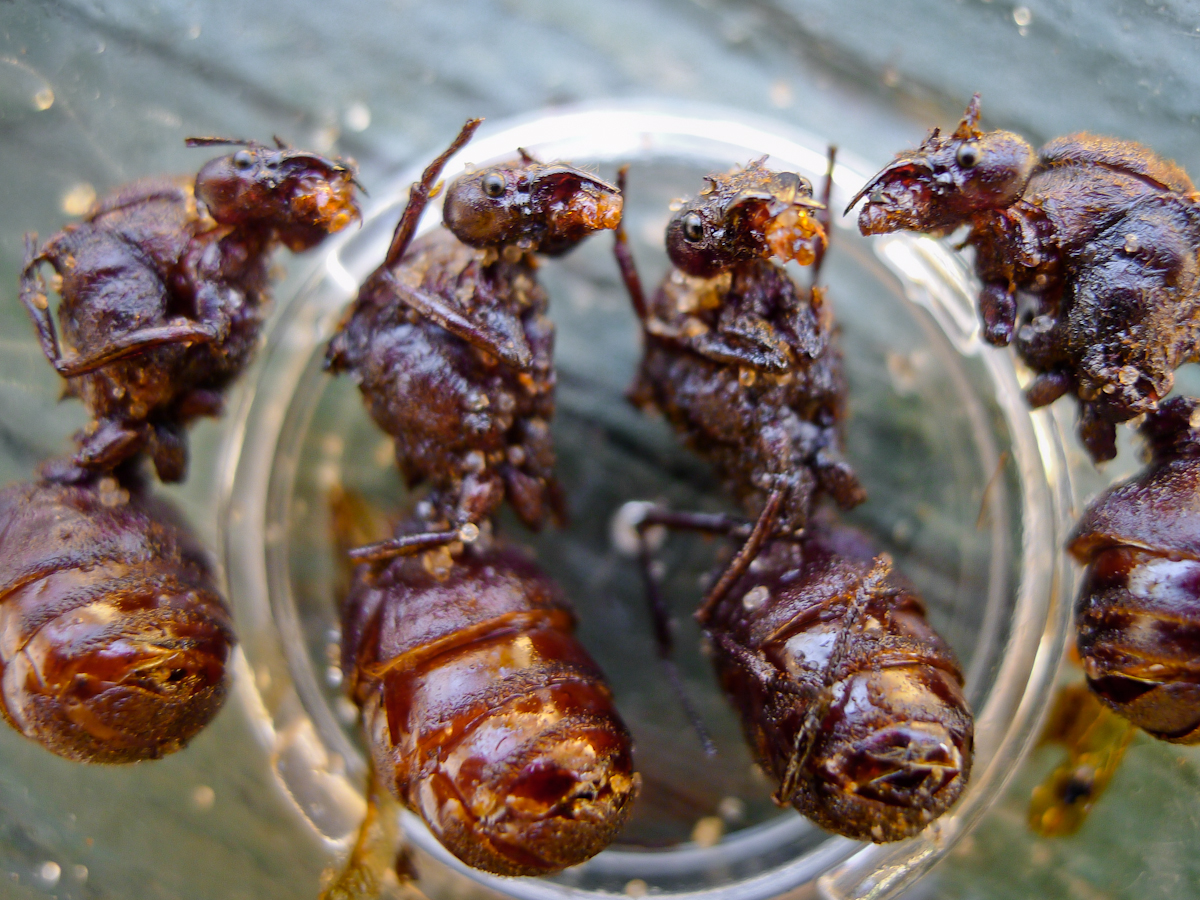 Ants are everywhere in the UK, not just a few, but millions, if not billions of them.
Most of our  ant species are very edible and they have a rather pleasantly sour flavour!

There sour flavour is mainly due to the fact that they secrete an acid when they feel threatened. This gives them a kind of vinegar-like flavour.

To capture your ant snack is very easy and requires no skill and is not time consuming - so perfect for prepping in the wild.

You can have them roasted with a bit of salt which gives you a nice, crunchy,  salt and vinegar flavoured ant snack.

Simply find an ant hill/colony and then  put a stick onto the anthill, you could add a little incentive to entice Mr Ant onto the stick, anything gooey and sticky seems to work, and then within a short time your stick will be covered with ants.

Simply shake the ants off into a pan and your good to go.

You want to try and roast them as soon as you can - you can't beat a nice freshly roasted ant! Do not just keep them hanging around - it will make them secrete more acid and and ruin their taste. 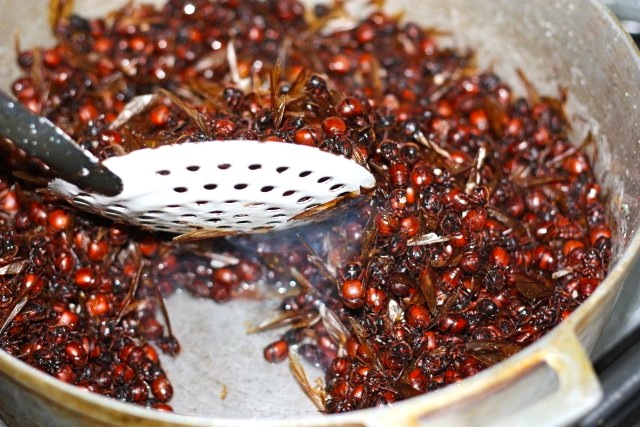 The humble slug is not technically considered an insect, but still edible, so that means food for us preppers and worth a mention.

The slug will eat the faeces of infected rodents and if you were to ever eat a raw slug the parasites would not live in their body any more, it can, however, produce an extremely toxic reaction called 'Eosinophilic meningitis'.

The Meningitis is an inflamed meninges, which is the sheath that surrounds your brain, and can easily mean severe brain damage.

I cannot stress this enough - I know you may have seen certain TV shows with high profile 'celebs' showing off their skills and where slugs are eaten raw.
But trust me, the key word here is survival, and why on earth would you actually risk eating something that has a very high chance of infecting you is beyond me..?

So how do you actually avoid this from happening?

How do you avoid putting yourself in any danger of this toxin - well, if you really have to eat a slug then the answer is simple!

You cook them first!  That applies to slugs or snails - never eat raw and always cook first. - but a slug is a kinda last resort!

Slug Feasting On A Dead Rat >​ 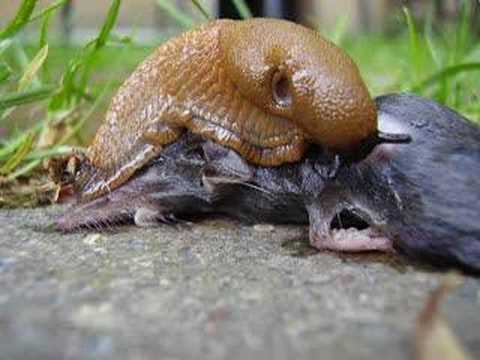 Both need to be 'purged' and cooked by removing the entrails first - similar to gutting a fish, you must remove these nasties before any eating takes place.

Purging is where you allow the passing of any food that the slug or snail has been eating to take place naturally by simply putting them in a box with some nice and healthy vegetation like wild greens, for a week.
This will the 'purge' out any potential poisons within their body.

Now they are nice n fat -

In the case of a slug - cut off the head first to kill the slug, then simply hold the body and squeeze downwards, bit like milking a cow, and the entrails will squirt out. [you could also cut open and remove]
Mr Slug will shrink quite a bit now but is ideal to chop up into bite sized pieces and then added to a stew, or even roasted over an open fire. If you have some old breadcrumbs and an egg, then cover in that mixture for some tasty deep fried slugs.

For a snail, it's preferable to steam them for 10 minutes first, this kills them and cooks their entrails as well.
Once steamed, simply cut open along their belly section and remove the cooked entrails - you could actually eat these entrails now, but the flavour could be a little suspect as you do not know what the snail has just been eating before you captured it..!

I prefer my snail 'O Natural' and void of any poo like substances..!

* DISCLAIMER:
I am not a doctor or nutritionist or insect specialist, or in any other way qualified on how to eat insects. I have gained my knowledge though experience and research.
So, if you have concerns, I suggest doing your own research on the eating insects before you go ahead and try some.

No results have been returned for your Query. Please edit the query for content to display.