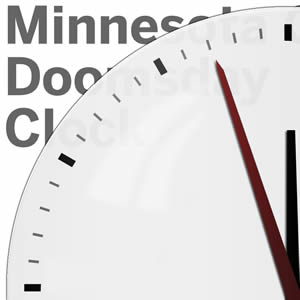 Barely one month into 2015 and we have now entered into the most critical stage of our earth’s life – ever..

For anyone who is even vaguely interested in the global events that have been happening over the last year, you cannot be anything other than concerned over recent events.

Today, January 24nd 2015, The Bulletin of the Atomic Scientists have announced the decision of its Science and Security Board as to whether it should or should not move the minute hand of the historic “Doomsday Clock” to a new threat level.

Our foremost scientific minds who watch and monitor world events are made of the most brilliant scientist from around the world.

The Bulletin of Atomic Scientists (BAS)
The Doomsday Clock is the BAS’ symbolic clock that shows the countdown to a possible global catastrophe. The BAS group, containing some 18 Nobel laureates, meets twice each year to evaluate and discuss our earths global events.

The Doomsday Clock was launched in 1947 and is deemed the way to “reflect the basic changes in the level of continuous danger in which mankind lives within this nuclear age.

The doomsday clock now stands at three minutes to midnight.

The nearest to the end of the world since 1984, during the cold war between the U.S.A and the Soviet Union. The last time the clock was adjusted was in 2012, when it was moved to five minutes to twelve.

The reason for this change to the doomsday clock.

They pointed out that the weapons modernization programs and systems of disarmament have literally “ground to a halt.”

With todays uncontrolled climate change and the threat of a new arms race, the results are that of uncontrolled threats to the very existence of humanity.

Our world leaders constantly fail us.

The failures of our world leaders are at an all time high, with their so called ‘leadership’ endangering every man, woman and child on our planet.