Do Preppers Need To Learn BowHunting For Food and Survival 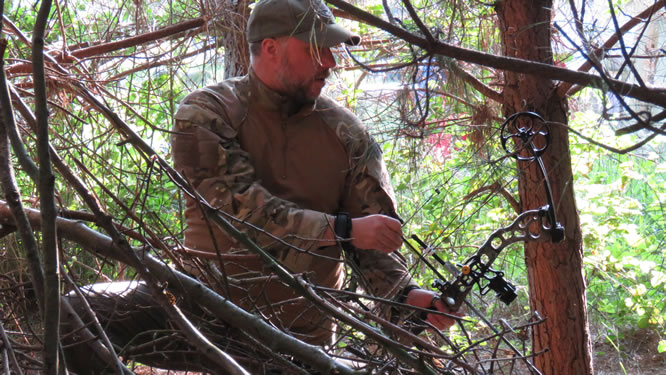 Without a doubt, owning a decent bow and being proficient enough to hit your given target successfully, is a very necessary skill, and something to add to your skillset as a prepper.

Being proficient enough to hunt for your food with a bow will give you a massive advantage over others should you ever need it.

The reason; to stop people causing unnecessary harm to an animal, from anyone just going around shooting for "fun".!
Although I'd like to add that fox hunting is actually on the illegal list, but still goes on, and foxes are still ripped to pieces by the hounds - but hey, this is the UK and it's one rule for some and another for the rest of us.

It's NOT ILLEGAL to use a bow for hunting in just about every other country in the world....!

France, for example, legalised bowhunting for all game animals as recently as 1995, also allowing foreign bowhunters to purchase a 10 day bowhunting license if required.

All countries have slightly different regulations with respect to what and how you can hunt for game, but all allow bowhunting of some sorts for population control right through to food procurement.

America has a large bow hunting fraternity, with rules and regulations as to what, where and when you can hunt with a bow. Including rules like: draw weight, type of arrow and shooting distance.

Surviving is all about thinking on your feet and adapting to the situation. Prepping is all about being ready for that situation before it happens.
Don't get caught out - get prepared first. 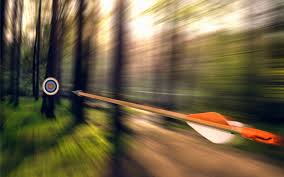 So, current rules and regulations apart, I still think it is a very good skill to learn, and while it is on the illegal things to do list, we must all act responsibly and NOT go out trying to bag a rabbit with our bow.

The whole skill is based around being able to hit a target, spot on, every time and mastering that skill take a fair bit of practice.

As with any form of hunting, there are many facets you need to bear in mind before even attempting to shoot your bow.
Given the fact that the actual shooting part itself is the easiest bit to master - in fact just about anyone can pick up a bow and aim reasonably accurately, and with a little bit of practice, become quite proficient at hitting their chosen target at 15 - 25mtrs.
The skill comes when you expected to do it every time and at a greater distance.
Target archery is a quite different level of ability to 'instinctive' bow hunting for food and survival.

So How Do You Become Proficient at BowHunting When It's Illegal? 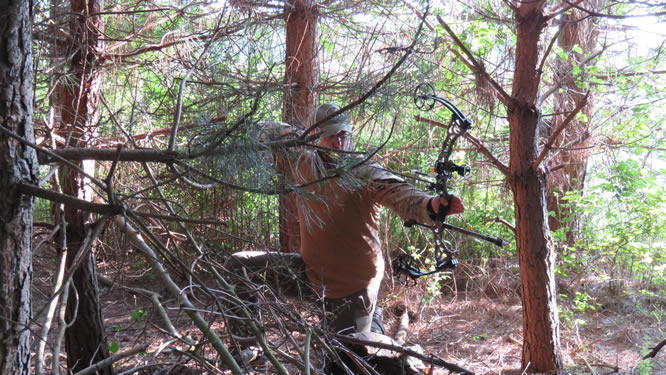 As with any form of hunting, there are many facets you need to bear in mind before even attempting to shoot your bow.

Given the fact that the actual shooting part itself is the easiest bit to master - in fact just about anyone can pick up a bow and aim reasonably accurately, and with a little bit of practice, become quite proficient at hitting their chosen target at 15 - 25mtrs.

The skill comes when you expected to do it every time and at a greater distance.
Target archery is a quite different level of ability to 'instinctive' bow hunting for food and survival.

The deer in this picture is not real..!

In fact it's what's called a 3d target: made specially for bow hunting.
There are various animals made from a very dense foam and sprayed or painted to look very life like.

There are companies that make these various animal targets and they are perfect for practicing the art of bowhunting within the law.

You cannot just wander onto someone's land, setup a 3D and shoot your bow though. This is a complete no no..! 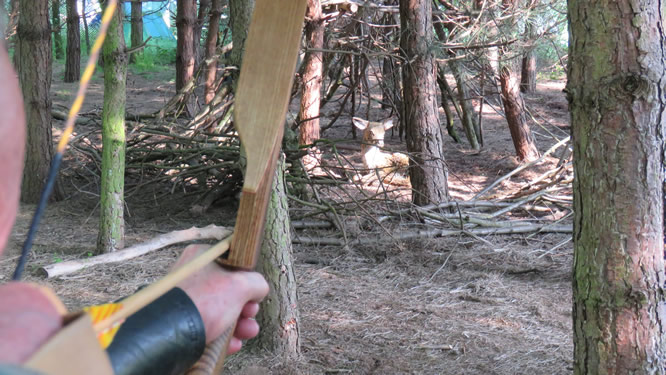 I would recommend sniffing out your local bowhunting club, there are loads about and a very friendly bunch they are as well.
Alternatively, check out the British Bowhunters Association here.

From a truly prepping point of view, going to a club and practicing this skill it almost the same as the real thing.
You can develop you stalking movements, stances, distance perception and aim. In safety, alongside other bowhunters who can help guide you on techniques.

There are targets as small as a squirrel, right up to full sized bears to practice your aim. But, as with any shooting sport, you will need equipment. 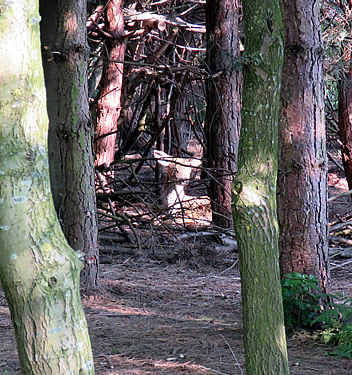 There are always those that take their sport seriously, and why not? But for us preppers, it's a practice using a different hunting tool should the SHTF ever happen.

As I mentioned earlier, the actual shooting part is a small section of the hunting. You have to learn how to find your potential dinner in the first place.

Tracking and stalking are another whole new area of food procurement, thats why the bowhunting clubs are so good - they at least give you an insite to most of procedure,  and you're able to test your aim as well.

A standard bow will be plenty enough to take down most small game at 15 - 25 mtrs.

Types Of Bow For Hunting

To my way of thinking ANY bow is a good bow if it suits you and you can shoot it accurately.

So, to that extent it means you do not have to go out and buy some all singing, super bow that will be accurate to 100 mtrs and is the bow equivalent of a carbon fibre F1 car.

Having said that, a decent hunting take down bow will be costing you around the £100 or less mark.
Thats for a good 'recurve' bow like the one shown here:

However, there are two types of bow you can choose: Recurve or Compound.

The main difference between the two is the complexity of design and moving parts.
A recurve bow is a very simple design that we normally associate with a bow and arrow.
The compound bow is somewhat more complicated in both design and function.
Here's an example of both types: 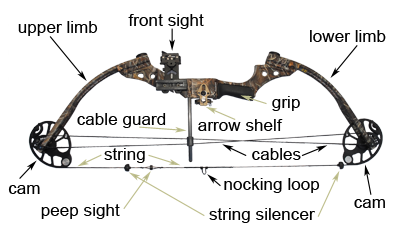 The basic recurve take down bow

There is also a bow known as a longbow, but, as the name implies, it can be quite a lengthy, these can be some six foot long and not really suitable for stalking through the undergrowth.

They are, however, extremely powerful, with a 80 lbs+ draw weight as common, mainly due to the size of the bow limbs being able to exert more force through to the arrow.

These 'traditional' bows would still work in a hunting situation and were used way before the compound bow was ever thought of! 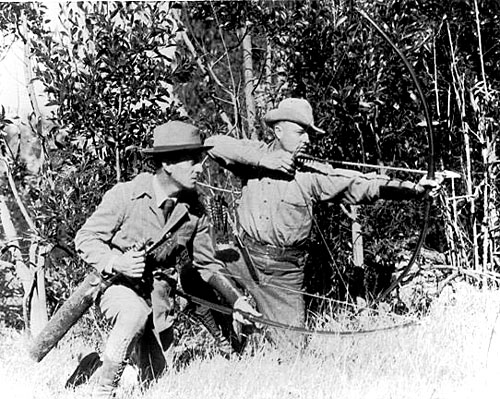 The amount of force you need to pull the string back is called the draw weight and, for most adults, anything upwards of 30lb draw weight on a recurve bow is required for good performance.

You can get a good idea of draw weight by taking a measurement from finger tips and dividing by 2.5. This gives an average draw weight in pounds.

The chart below gives additional information to help you select you best draw weight.

When it comes to Bowhunting For Food And survival I wouldn't use anything less than a 40lb draw weight.
The chart may show that you size and bodyweight cannot handle 40lbs, but choose a lower draw weight until your used to it and have built up your draw strength and muscle memory before moving up.

If you cannot draw 40lbs minimum without loosing accuracy and if it is hard and tends to create shake when trying to aim, then you are someone who definitely need to consider a compound bow.

A recurve bow having a draw weight of 30 or even lower at 25 is still a hunting tool in the right hands.
However, with that low draw weight it is ideal for targets and recreational use, but again, in the right hands is capable of hitting a target, pretty accurately at 50 metres every time, although power [kinetic energy] through the arrow is much lower at this poundage.

With this increased draw weight you will be hitting targets up to 75 metres, especially if you have a good eye for it.

But remember, we are talking hunting for food and survival here. Where every shot counts. So you'll not be looking at distances anywhere near 75 metres. More like 25 metres maximum, but closer if possible.

I would always go with a 40lbs bow as well.
Using 40lbs at 25 metres will deliver maximum kinetic energy for a clean kill, and being well within a comfortable kill zone the shot will be accurate.

A Quick Mention About The Tradiitional Longbow

I am not aware of any standard recurve bow that has anywhere need this kind of draw weight, but it is worth giving the Traditional Longbow a mention again.

Historically, the Longbow had this kind of draw weight as standard.
Even more so in the English Longbow which was a formidable hunting and fighting weapon and very popular during the middle ages.

An English Longbow archer would arm himself with a 110lb Longbow and it was deemed to be very suitable for combat.

Some of the very strongest archers would even carry a 130+lb Longbow into battle - almost unthinkable nowadays!

This amount of power would of been devastating, with the history book mentioning these archers being able to accurately shoot over 200 mtres and still pierce human flesh 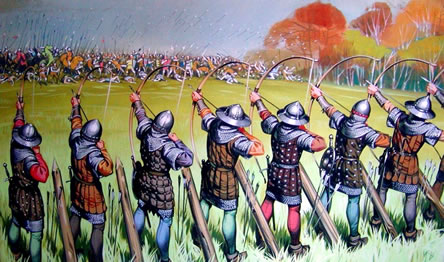 In a SHTF situation we like to keep things simple, and by far the recurve is going to your mainstay bow of choice. Purely for its simplicity of design and amount of moving parts.
The least amount the better.

But with a compound bow you are offered more scope to hunt: i.e., you can be considerably more accurate over considerably longer distances.

In conclusion, it is generally considered that a decent 40+lbs recurve bow is going to be the preppers choice for hunting.
It's silent, accurate and reliable, with very few moving parts to go wrong.

So long as you practice your aim you will have success every time.
This is a definite prepping tool to add to your arsenal, especially for food procurement.