Firstly, the facts of life... It is illegal, under UK law, to carry a knife, a gun or even a stick to help protect yourself from being attacked.

Many women get attacked each year here in the UK and it doesn't matter whether it's late at night, in the middle of London or in a quiet village, the risk is very real and a very frightening and traumatic experience that will stick with you for the rest of you life. There's only really 3 main reasons a woman gets attacked:

Each one can have dire consequences and some can leave permanent damage both physically and mentally, leaving you to live with the thought of how you could have prevented the attack in the first place... There are a multitude of scenarios that lead to an attack on women, combine that with a thousand different situations and times and places - they all add up to the fact you never really know when an attack may happen.

You rarely know the frame of mind the attacker is in and the motives that have lead up to you being the victim.

With so many variables how are you supposed to tell the good from the bad, the muggers from the helpers and the scumbags that think they can prey on women for simply walking down the street.

There are, actually, a few very simple things you can do to help prevent an attack - the number 1 and most obvious is 'to not be there in the first place'...!

If you avoid going out, by yourself, in darkness [or even daylight sometimes] then the risk is not even there. But we all know this is not always possible or a realistic choice. When you do go out at night, try to be with friends, male and female, at all times.

Don't Be A Target For whatever reason, if you have to travel alone then vary your route home and travelling at different times.

This will make you an unpredictable target - you no longer become a 'creature of habit' and severely reduces the risk of becoming the stalkers dream victim who always passes by this dark alley at exactly the same time each night...

We are all very much creatures of habit, which makes us complacent and drop our guard when it is most needed.

Be aware of your surrounding and the people around you - who's in your space, do you feel comfortable and are you boxed in with no escape route if you needed to get away.
Always try to ensure you have a 'Plan B'

If you have your head buried in your mobile phone, busy texting someone, then you have no idea who is around you, who's looking at you and who has been following you for the last half hour..!! FACT.... If you are someone who walks down the street with your nose buried in your phone:
STOP IT RIGHT NOW.!

This is a very dangerous pastime.

Yes, you may have just got off the train with a hundred other people and started walking home, but where are they now.?

You suddenly realise you have been walking, alone, mindlessly unaware that it's just you and someone following quite closely behind - you don't know who, whether a man or woman, young or old, big or small.... No Idea....!

What Is The Solution?

Possibly the best defence is simply be aware of your surroundings and who's in them, as well as, don't put yourself in a dangerous situation if at all possible.

Simple awareness can heighten your ability to predict if a situation is safe or not and give you the advantage of a couple of seconds to react prior to that attack.

What Defence Can You Use?

The UK Laws state that you can use reasonable force in order to defend yourself against an attacker OR if you think an attack is about to take place OR you are threatened enough to make you think you are about to be attacked.

So you can defend yourself - but with what..? Unless you are a trained in martial arts or unarmed combat the idea of fighting off an attacker is quite daunting for any woman.

Regardless of the fact that you may be trained in some type of self defence, fighting off an attacker is still a big ask for the average woman to do.

Even a trained man can easily get into difficultly and sustain severe injuries when in a self defence situation.

Your Main Defence Is To Be Aware,
And Pre-Empt The Attack Before It Can Start

This is where a defence spray comes in.
A spray that can be used, similar to pepper spray, that will stop an attacker and render that attack useless for those valuable seconds needed for you to make an escape and be gone before they know what's happened. Based on the pepper spray theory they omit a stream of red spray, * not a thin spray like paint, but a consistent, heavy stream that reaches up to 4 metres.

The spray will temporarily mark the attackers skin and clothes.

They  contain a dye that makes them instantly recognisable to the police for up to 7 days after, and is almost impossible to wash off for the first few days. 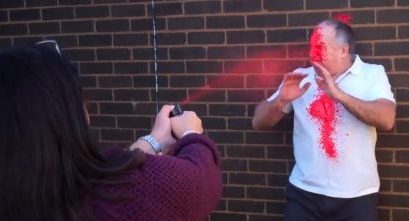 I own several of these sprays and as you can see in the video, I have gone so far as to test them out on myself.

It was not a pleasant experience and there was no way I could of carried on with an attack - I simply could not see where I was going!

The red Farb Gel spray sticks to everything and an attacker would be totally disorientated for those few vital seconds, once sprayed in the face.

All the sprays are compact enough to fit in a pocket or use the belt clip and as simple to use as spraying some perfume.

All it takes is being aware of your situation and being prepared to take action.

Without a defence spray in your hand you have no real defence, however, with a disorientated attacker you gain vital seconds to make an escape.

If your attacker can't see you, then they can't attack you...

The whole thing goes full circle now, and we get right back to spacial and people awareness - and if you feel threatened or an attack is likely, you can defend yourself in this way, and make an escape.

I hope this article on the "UK Legal Pepper Spray Alternative for Women" has spurred you on to get some for yourself and your family - I highly recommend it.