What is Preparedness UK

What is the state of preparedness in the UK

Is it possible for a total meltdown of our society?

A lot of people are now realising we are in a very fragile time of this earths and mans evolution and there is a very real chance of a major shift across our planet.

"What would the government do to help you"? - There are plans in place. Of course there are. But these plans are mainly for local disruptions of the normal, everyday life that we all know. But in a dooms day scenario  we are talking about the whole of the United Kingdom being effected.

Yes, it may start locally, but very soon spread to larger areas and then the whole country.You only have to look at how quickly situation escalate to see how easy total collapse would be. A very big proportion of UK citizens are in a state of zero preparedness for ANY situation, let alone a major one. 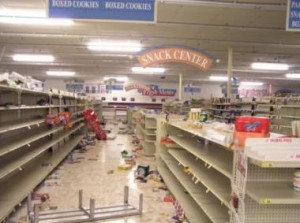 A fuel dispute brings the nation into blind panic and petrol station are empty within hours - how would you cope if the perol supply was cut of totally.?

A sugar shortage in the shops and the shelves are cleared within a day - imagine if that was food in general, the shops would be totally void of any food.!

Heavy rain, or prolonged snowfall or adverse weather conditions grind the country to a halt again.

And to think, all these are relatively low key situations that require the minimum of preparedness here in the UK.

I am sure the powers that be have some wonderfully secret  plans to evacuate high ranking officials and government ministers, and keep nice and safe and fed and warm and looked after - and why not.? After all it's every man for himself and I'm sure they have made dam sure their ok, thank you very much.

Yes, efforts have undoubtedly been made for the masses but, as we have seen in the past, it really is no where enough, it hardly touches the sides of what would really happen.

Possibly the key thing to remember is this - As the situation worsened the people in charge, the fire officers, the servicemen, the police and all other people involved in trying to help would be overwhelmed and simple understaffed and under equipped. Add that to the fact that these people also have families and loved ones that they will be drawn to help their own family - it's human nature. They will not see their own families suffer - that's when the total meltdown will escalate to a law, of no law.

Now all this doom and gloom used to be just pushed to one side, for another day. The 'it wont happen to me' syndrome. But in all honesty, the state of preparedness in the UK for a major, country wide, disaster situation is poor at its best.

It would be a mammoth job to prepare for such a thing and would cost billions of tax payers money to set up for everyone to be accounted for. There's over 60 million people in the UK. You just cant prepare for a major disaster with that number of people in mind.

The United Kingdom is prepared - to a small extent - for localised disaster situations, whether man made or natural disasters, we can cope on a small scale, with some of the finest emergency services in the world to help us, but being prepared for a major event that effects the whole country is quite a different thing altogether.

If everyone made time to prepare and was ready with adequate supplies and knowledge we would be half way there. In any major disaster it always boils down to 'every man for himself' and if the government have plans in place to help then there's your other half.

But don't think that the state of preparedness in the UK is going to cover everything. It simply can't. An EMP, whether natural or man made will wipe out our society in a flash and put us back hundreds of years - this, along with other possible scenarios that can effect our whole structure of live as we know it.

So what IS the answer?

It's up to you. Start prepping yourself. Little by little gathering essential items to help keep you and your family alive. Theres nothing weird with being a prepper its just common sense - and, actually quit enjoyable ..!